Atmospheric Motion Vectors (AMVs) are derived by tracking clouds or water vapour structures in consecutive satellite images. In many regions of the globe, AMVs are the only wind information and are thus an essential ingredient for NWP. However, height assignment issues and horizontal error correlations require a rigid thinning of the available AMVs in current data assimilation systems.
For this reason, a method has been developed to directly correct motion vectors heights with nearby lidar cloud top observations, at first in an experimental framework with airborne observations during a field campaign (Weissmann et al., 2013) and subsequently using observations from the polar orbiting satellite CALIPSO (Cloud-Aerosol Lidar and Infrared Pathfinder Satellite Observations). (Folger and Weissmann, 2014). AMV winds were validated before and after the height correction by using dropsondes and operational collocated radiosondes, respectively.

The results of both studies demonstrate that the errors of AMVs can be significantly reduced when information from lidar cloud top observations is incorporated. Main results of the second study using spaceborne lidar observations are shown in Figure 1. For upper level Meteosat AMVs, we found that assigning 120 hPa layers below the lidar cloud tops leads to an improvement of ~12% compared to assigning layers of the same depth centered at the original AMV heights and of ~17% compared to using the discrete original AMV heights. Altogether, 2835 AMVs during an 8-month-period in 2012/2013 were used (948 IR and 1887 WV). 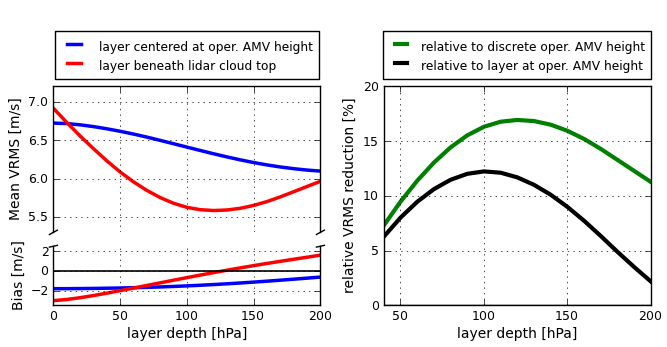 In summary, our study demonstrates the potential of using lidar cloud observations from CALIPSO or other future space-based lidars for the height correction of AMVs. Further studies are planned to investigate the benefit of assimilating lidar-corrected AMVs in NWP models.